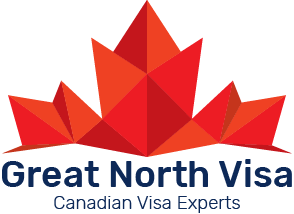 - Immigrating to Canada From Ireland: The Complete Guide 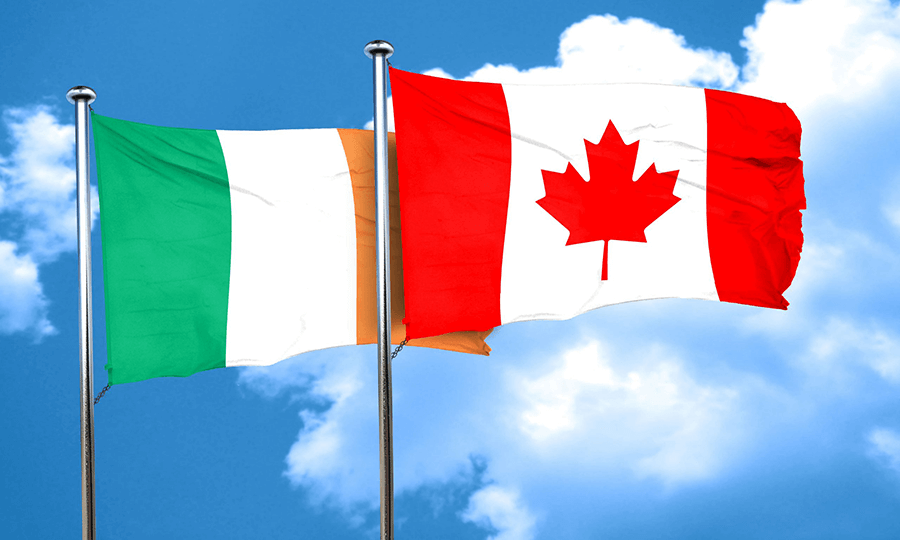 Immigrating to Canada From Ireland: The Complete Guide

There are many reasons why someone may wish to immigrate to Canada from Ireland. But what are those reasons? And how can people go about getting a visa? Great North Visa, the Canadian visa experts, are here to answer all your questions about making the move from Ireland to Canada.

How different is Canada to Ireland?

In terms of culture, moving to Canada from Ireland is probably not that much of a difference. Today there are already over 4.5 million Canadians (around 13.5% of the population) with full or partial Irish heritage. This actually makes the Irish the fourth biggest ethnic group in Canada!

When it comes to religion, 70% of the Canadian population identifies as some form of Christian, usually Catholic (compared to 84.6% of the Irish population). And in terms of politics, both countries enjoy parliamentary democracies and have high levels of personal freedom.

However, choosing to immigrate to Canada from Ireland will bring a wealth of benefits; Canada consistently ranks among the top countries in the world, year in year out, in terms of quality of life. According to the 2020 US News & World Report, Canada is currently the second-best country on the planet, climbing from third place in 2019. In addition, the country ranks as fifth best for women and third-best in terms of doing business. Crime rates are 45% higher in Ireland.

Moving to Canada from Ireland also helps your bank account, since the cost of living in Canada is much lower. Eating out costs around 23% less. Rent prices are around 28% lower. And generally speaking, purchasing power is almost 12% higher than in Ireland.

It is fair to say that the two countries have been closely linked for ages. It was the arrival of the French in the 17th century who first brought Irish soldiers to the country. Later, in the 18th century, a fisherman from the Emerald Isle would work the coasts of Newfoundland and Labrador. As a result, many would settle in Canada permanently. Over half a million Irish immigrants had either settled or passed through the country to the USA, by 1850.

Prior to 1922, both Ireland and Canada were a part of the old British Empire. But throughout the 1920s and 30s, both countries were working to break away. In 1929, Canada sent John Hall Kelly (its first-ever High Commissioner) to Ireland. This was significant in a time when Britain did not permit Canada to have embassies and the Irish Free State was still not completely independent. Canada eventually gained independence in 1931, while Irish independence came slightly later. But in 1939, both countries established embassies in each other’s capital cities in a show of solidarity.

In more recent times, Canada has publicly supported the Northern Ireland peace process. And in the late 1980s, Canadian PM Brian Mulroney pledged up to $10 million in support to both Ireland and Northern Ireland, for social development programs.

Why Move from Ireland to Canada?

In addition to some of the financial and social benefits mentioned previously, there is also the fact that Canada is massive! As the second-largest country in the world, there is a great deal of diversity, meaning there is something for everyone. Look at Toronto, a multicultural, ultra-modern commercial and business center, compared with the natural beauty of Alberta. Or take the mild temperatures on the coast in Vancouver and contrast it with the winter in Saskatchewan.

This diversity also applies to its population, and Canada has a strong reputation for welcoming migrants. With one of the world’s oldest average populations, the country relies upon its migrant workers. In fact, the Canadian government had announced ambitious plans for immigration in the period 2020 through 2022, seeking to import around a million migrants. Sadly, the COVID-19 pandemic put paid to this. But as a result, the newly revised Immigration Levels Plan for 2021 through to 2023 is even bigger. Canada is now seeking to bring in more than 400,000 immigrants, in each of those three years.

Because the country has such a long history of welcoming those who seek to emigrate, the immigration system is mature, efficient, and specialized. Programs such as the Provincial Nominee Program, also known as PNP Canada, exist specifically to make it easier for skilled migrants to move to Canada. The International Experience Canada (IEC) sets targets to import migrants from specific countries. It usually allocates around 10,000 places for Irish citizens. So, applying for a Canadian visa from Ireland through the IEC program is relatively straightforward.

As a result of the many Irish ties to Canada, there are lots of organizations to make you feel welcome. If you are feeling homesick or looking to network with your fellow countrymen and women, you could reach out to the Irish Canadian Immigration Centre. They can provide a long list of clubs and events that cater to the Irish community in the country.

How can I move to Canada from Ireland?

If you are ready for a change from the Irish way of life, emigrating to Canada could well be the answer. You would certainly not be alone. Many Irish nationals move to Canada each year, intending to settle permanently and secure a better quality of life. But how does one kick start the process?

A move to a new country can be complicated, which is where the Canadian visa experts at GNV can help. To better understand the Canadian visa process, whether you want to apply for IEC Canada, PNP, or Express Entry Canada, we are here to explain. And you can always reach out to us for more information.

The Express Entry Canada program is a fast track to obtaining permanent residency. Introduced in 2015, it allows skilled migrants to bolster Canada’s workforce in areas where knowledge or academic experience may be lacking.

Express Entry Canada is an extremely popular way to gain a Canadian visa and so a limited number of places are available. The program offers three types of visa: the Canadian Experience Class, the Federal Skills Trades Program, and the Federal Skilled Worker Visa (more info below).

Since places on the Express Entry Canada program are limited, you will be judged on six criteria (including age, professional experience, education, and language skills) using the Comprehensive Ranking System (CRS). All categories earn you points, and the higher your own score, the greater the chance of being chosen from the pool.

If picked, you will get an ITA (Invitation to Apply) from the immigration authorities. At this point, you have 60 days to file an application for your permanent residency. This will be processed within 6 months. If you are not selected from the Express Entry Canada pool after a year, you will be allowed to reapply.

In addition to the points-based entry requirements, the Federal Skilled Worker program requires applicants to:

The Federal Skills Trades Program for Canada requires applicants to:

The Canadian Experience Class is for temporary workers already residing in Canada, that wish to become permanent residents. To be eligible, you must:

NB: You must not intend to live in Quebec since it has its own Experience Class program.

The Provincial Nominee Program also targets people with specific skills, knowledge, or experience, but each of the 13 different provinces has its own regional program. So, in a way, the PNP is a kind of spin-off from the Express Entry Canada program.

Since each region has different economic requirements, eligibility differs for all 13 programs, but the process always involves two steps. First, you must be nominated to submit an application by the province. Secondly, you need federal approval for your permanent residency, from the Canadian government.

Below is the full list of territories that each has its own specific Provincial Nominee Program:

Successfully qualifying for the PNP allows not only permanent residency but the opportunity to bring your family along. You can also apply for full Canadian citizenship.

The IEC Working Holiday Visa is valid for up to 2 years, making it ideal for younger people who wish to travel and earn money. If you are aged 18 to 30 (for most countries) then you’re eligible to enjoy time in Canada, but here’s the thing. If you are looking to move from Ireland specifically, the upper age limit is 35. So, you have even longer to make the most of the opportunity!

IEC Working Holiday Visa holders may be employed by anyone in the country and you don’t need to already have a job to apply. You can simply turn up in Canada, opening the doors to new career and networking opportunities. As well as awesome travel adventures!

Much like other Canadian visa programs, IEC Working Holiday Visa entrants are added to a pool, since limited places are available. Applicants are chosen randomly, with the lucky selected candidates receiving an ITA (Invitation to Apply). Application dates vary from year to year, so be sure to stay on top of things, to increase your chances of success. Get in touch with Great North Visa if you require any assistance.

Moving from Ireland to Canada will do wonders for improving the quality of your life. Whether you are a skilled migrant looking for a fresh start, or a young adventure seeker looking for a new experience, Great North Visa can help you to identify the right visa program for your needs.

With a strong track record of successfully helping applicants to land their Canadian visa, our experienced team of certified agents can help you with your dream move. So get started today, for a better tomorrow.

Top In-Demand Jobs in Canada for 2021 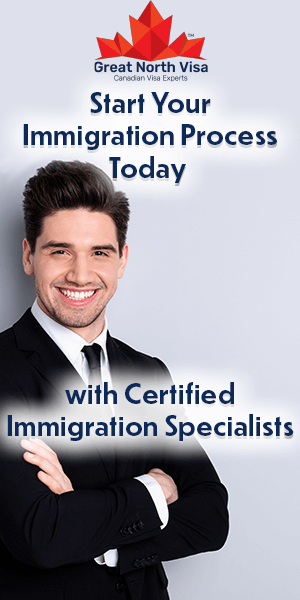 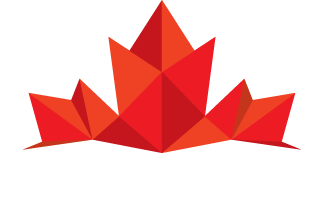